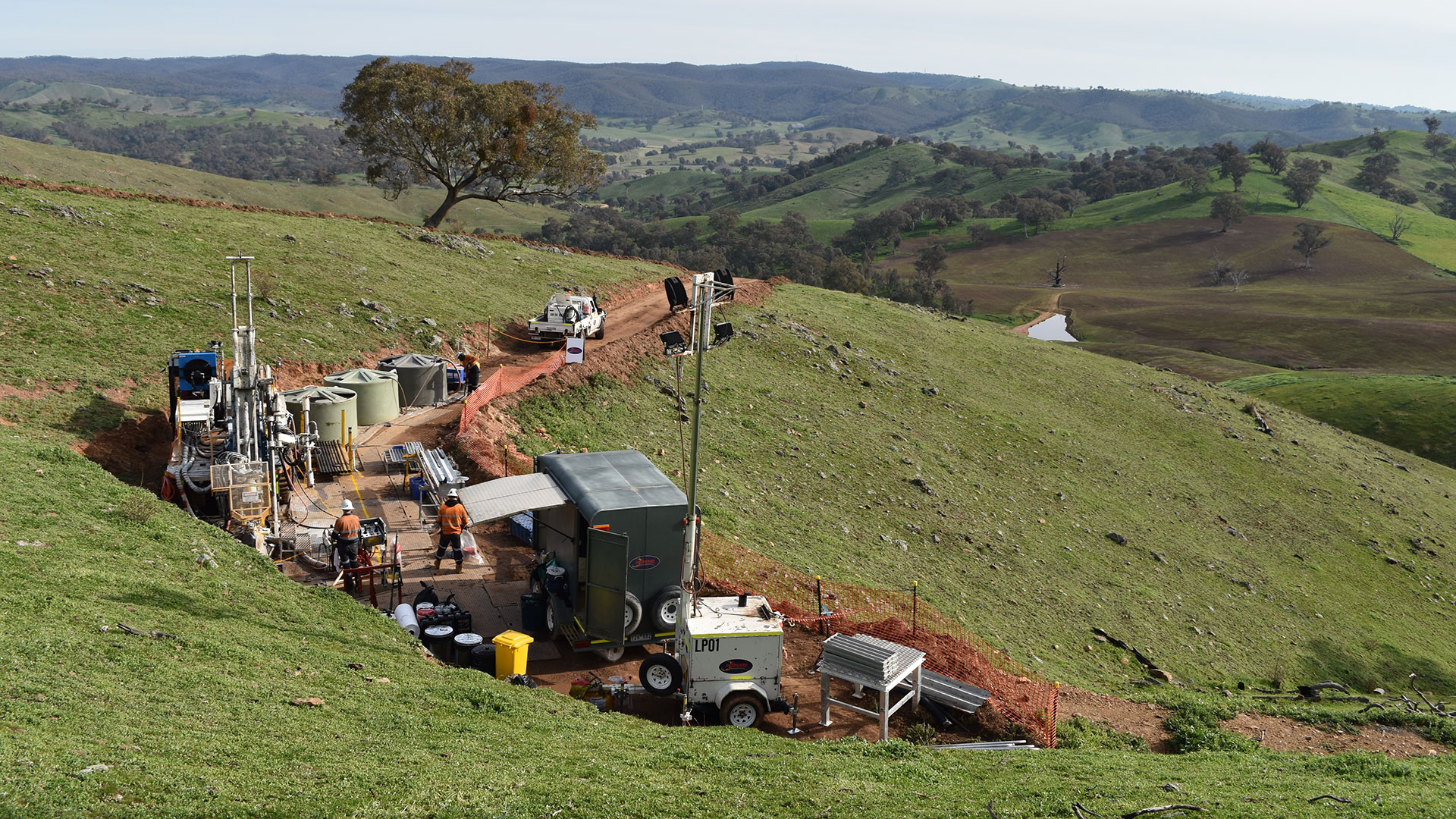 The Company has a significant land holding situated along the Gilmore Suture within the highly endowered Lachlan Fold Belt. Some of the largest gold orebodies in the world sit within this region. The Project hasn’t been systematically explored since the 1980’s, with most recent exploration attention focusing on the Hobbs Pipe gold deposit which has a JORC 2012 compliant Mineral Resource estimate of 20.5Mt @ 1.1g/t Au for 770,000 oz of contained gold – commencing from surface and extending to 700m depth where mineralisation is yet to be closed off by drilling.

Recent remodelling by Wildcat consultants of IP geophysical data acquired by a previous explorer in 2013 has recognised a further six features that may represent chargeability anomalies of pipe-like geometry within 600 metres of Hobbs Pipe. Exploration work is required to investigate these targets.

A number of further high-grade reef-style and bulk tonnage stockwork-style targets have also been recognised in Wildcat’s tenement holding at Mt Adrah. Wildcat has already commenced surface geochemistry and geological mapping to define drill targets to realise the full potential of these prospects.

The Nacki Nacki prospect has been interpreted as a possible weathered cap and alteration halo sitting above a Hobbs Pipe-style intrusive. Recent reconnaissance rock chip sampling by Wildcat has returned high-grade gold results of 7.23g/t and 12.7g/t. Only six airtrack-percussion holes to a maximum depth of 48 metres have been undertaken to test the potential of this area. Results include 2m at 0.74g/t Au from 12m, 4m at 0.95g/t Au from 12m and 2m at 0.75g/t Au from 24m, all from the Breccia Lode Reef.

The Diggers Creek Prospect is a broad area comprising a few sites of historic mining from shafts and shallow pits. Previous channel sampling across reef zones in workings returned 26.3g/t Au and 2.03g/t Au. Wildcat is currently undertaking surface geochemistry appraisal of this prospect. Outcrop samples between Diggers Creek and Highway prospect returned 2.94g/t Au and 2.11g/t Au. Follow up work is required to appraise this area. No drilling has been undertaken in the Diggers Creek area.

The Hillas Creek area was previously mined by small pits and shafts with depths greater than 10 metres and extending over an area of greater than two kilometres. Samples from mullock include 14.88g/t Au and from a quartz veined shear zone in historic workings 6.40g/t Au. An outcrop sample collected 2.5 kilometres north of Hillas Creek, returning 26.1g/t Au and 7640g/t As, has received no follow up work. Recent soil sampling by Wildcat over the Hillas Creek trend has returned linear coincident gold-arsenic anomalism that requires further investigation. There has been no drilling undertaken in this area.

Historic workings at Hill 303 Prospect and the nearby Hill 303 West Prospect, located 2 kilometres to the west, comprise scattered pits, trenches and a few shafts. Mineralisation has previously been described as similar to the Adelong Gold Field mineralisation. Rock chip sampling has returned numerous anomalous gold values to a maximum of 3.24g/t Au from mullock and 1.93g/t Au from outcrop. Previous RC drilling to 78m depth covering 130 metre strike extent at Hill 303 returned broad low-grade zones of 22m at 0.15g/t Au, 8m at 0.13g/t Au and 12m at 0.26g/t Au. Wildcat is currently assessing the entire prospect area between Hill 303 and Hill 303 West through surface geochemistry.

The Highway Prospect was discovered through reconnaissance geochemistry with no significant workings in the area. Initial results from outcrop and road cutting sampling returned values to 2.94g/t Au and subsequent soil geochemistry defined a 700m by 200m gold anomaly with a peak value of 3.08ppm Au (attributed to nearby gossanous quartz vein outcrop). Geopeko Australia completed 9 RC percussion and diamond holes to a maximum 400m down depth hole to test the soil anomaly, returning intersections of 6m at 1.93ppm Au from 42m, 12m at 0.34ppm Au and 1m at 7.21ppm Au from 259m. After testing only the central 450m strike extent of the soil anomaly, Geopeko did not undertake further work. Later work has returned rock chip outcrop results of up to 17.3g/t Au. Wildcat is currently appraising the prospect with further surface geochemistry.

For the past two decades, exploration has been focussed almost exclusively on the Hobbs Pipe resource with no systematic exploration conduction within the broader tenement area. Large portions of Wildcat’s Mt Adrah tenure has received no exploration coverage apart from historic stream sediment sampling. Potential extists for new discoveries along regional-scale structures that are associated with zones of known mineralisation. Wildcat has already commenced further geochemistry and geological mapping in areas of known mineralisation to define drill targets to properly appraise the potential of these areas. Wildcat’s technical team will apply modern exploration techniques to define high grade gold and bulk tonnage gold targets for drilling.